FYI: Click on Pictures to see full size! O yeah I was a little drunk when I wrote this because I had to keep buying beer for the internet service!

Today we spent the day exploring the Island of NuKu Hiva which is one of the Iles Marquises Islands. We hired a very nice man named Tata Mahina  AKA Thomas. We meet him in his restaurant which is the second and only other restaurant on the island which is a truck with a porch to eat your meal under.  We had gone there for breakfast and enjoyed a pile of French bread, jam, butter, and the best coffee which was served in bowls because he had no cups but ended up being the best coffee to date. We arranged a tour of the island for today which he was happy to do because he said he was the best driver/taxi man on the island. My dad spent a hour talking his price down and we settled on a good price of 18,000 Franks, which is not bad for 3 people.

Thomas or Friend and Driver

It was 8am and we started our drive around the island which would take all day. We began up the mountain and stopped just above our anchorage in the bay of Taiohae.  As we drove up we passed our Norwegian friends who I am working with to do a pig hunt on the island hopefully. All 3 of them arrived on a 27 foot sailboat that had no motor, little food or water but they made it 3000 nautical miles from the Galapagos. They had 4 people but they bought to much rum in south America and made the other guy go home, true story.

After passing our friends and making our way around the winding roads up the mountain we came into a red pine forest and I quickly felt like I was at home driving through Upper Michigan. Then we traveled for through the old crater of the volcano that once was fire, ash, and lava but today is green pastures for wild pigs, cows, and horses. 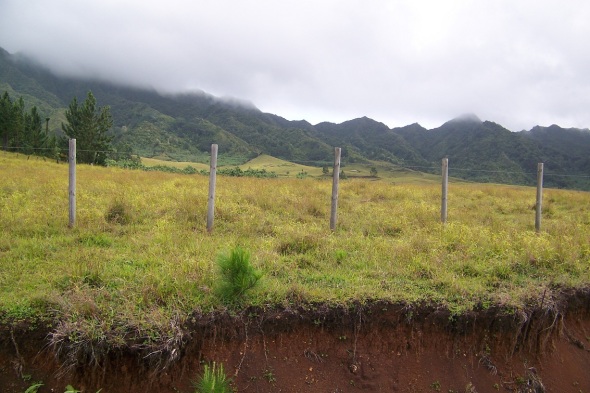 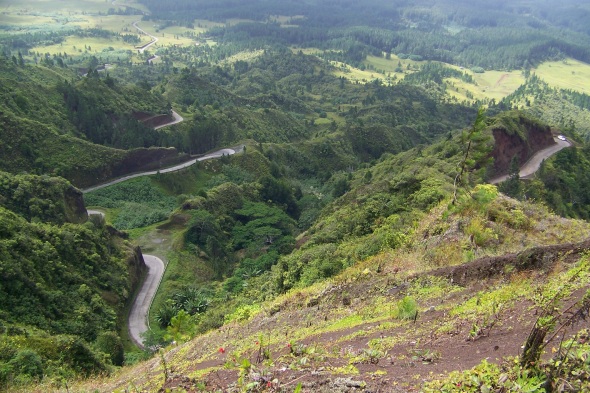 After we passed through the old crater we started climbing up the north side of the crater but soon ran into a big problem. Once again like all my adventures into the wild we ran into a road block. The day before there was lots of rain and there was a small rock slid that was blocking the mountain road. We were told that we could not pass because the road was blocked by rock and earth. Well being the engineers and builders that we are we marched up to the problem and said that this is no problem to Thomas.

All we had to do was move a few rocks and compact the earth a little and drop that truck into 4X4 and get ON IT, HUBA HUBA BABY! So we went to work and moved the big rocks and with our hands tossed rocks, mud, and shrubs out of the way. It took about a hour but we made a great road. The first jeep made it over and then the next. The three of us felt great to help  out the local people to make it across the earth slid and people thanked us all day. I felt great to fix a problem other than a sailboat related. With smiles on our faces as we continued around the island to the Village called Hatihau. Thomas said we are the best and smiled.

I guess I miss understood Thomas when he said we would take a dirt road and it would be a short cut. What he really meant was that the dirt road or two track was the main road on the back side of the island to his village. As we drove along the two track dirt road we passed a canyon, and meadows of green.

It was so funny as we drove the road had cows, horses, and goats which sometimes blocked the road. It was really interesting when we would drive by the animals at 35 mph and they just stood in one place like nothing was happening. I would think to myself, “if that bull moved 2 feet to the left we would hit him head on and more then likely die”! 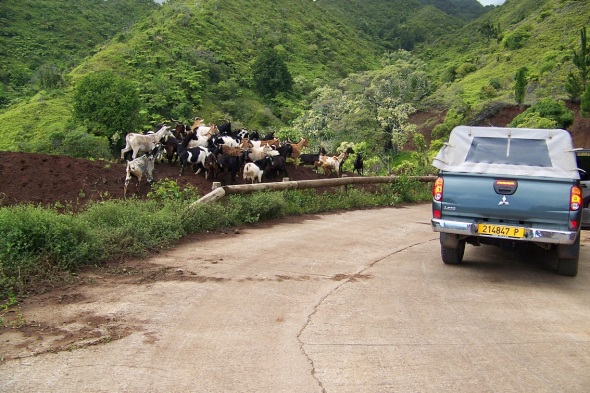 We continued to drive and saw some of the most beautiful landscapes I have ever seen. 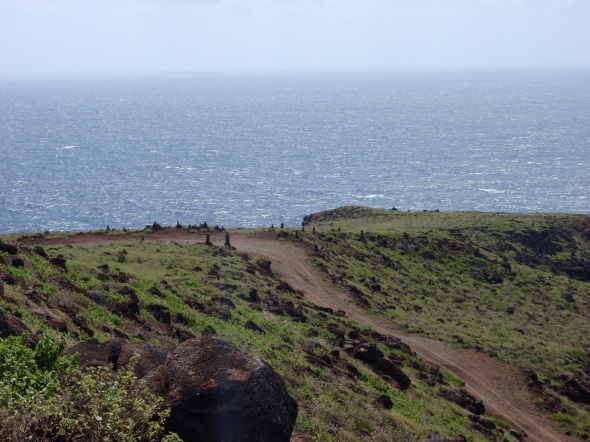 It was realy cool as we drove we would stop and get melons, papaya, mangos, grapefruit, coconut, bananas,  and a few other fruits I don’t know the names of but ate anyway. They all were right off the trees and we ate them up.

After we stopped for a picnic we traveled to Thomas village and his home where he had to stop and feed the cow goat. He told us to look at his mango tree and left us. We enjoyed a chicken fight as they beat over one another to eat the mangos that fell to the ground. Then Thomas came back with a hand full of fresh limes for my dads Gin and Tonics. Then he used his home made mangos catcher to gather up fresh mangos and gave us a dozen for the boat.

It was getting late about 5pm and Thomas had to stop and get coconuts for his restaurants which we helped him do. Then we drove back down the mountain to the bay we are anchored in. We all agreed that the day was fun and worth the cost. We got into the dinghy and made it back to Dragonsbane to have beers, and eat dinner as we watched the sky clear and the man in the moon smile at us as we smelled the sweet island smells drift into our cabin.

This entry was posted on May 25, 2013 by Jacques. It was filed under Uncategorized .