Bora Bora has been a very interesting place to be so far but I wanted to catch everybody up on my last two Islands and all the wonderful things we have been doing. So I am going to back track and cover the last two weeks in greater detail and pictures. I am still in Bora Bora and have been climbing mountains and studying the weather for our next major passage. My current plan is to sail past the cooks and onto Niue and then to Tonga which is about 1200 nautical miles. But for now I am enjoying the happy hour here in Bora Bora. 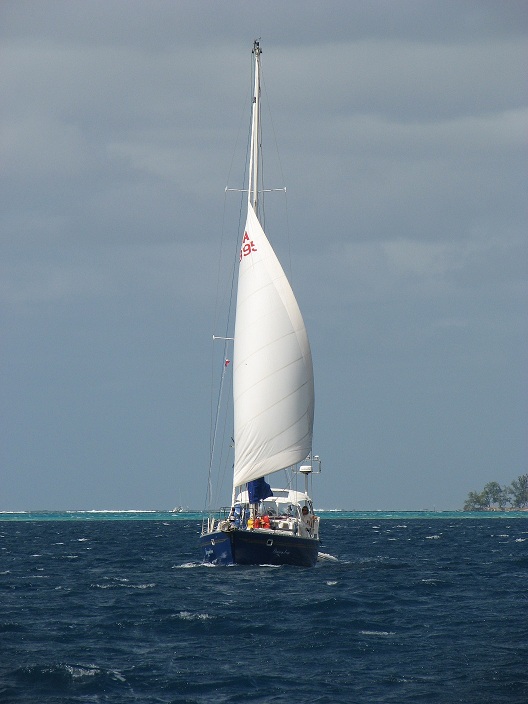 Sailing into Raiatea through the Lagoon.

Looking back when we arrived from Tahiti to the Island of Raiatea we went to shore and hiked to the archaeological site that contained the history of the Polynesia people before the introduction of Christianity. The site was made up of coral stones and had a large stone alter that held the symbols of varies gods that were worshiped by the Polynesians. The stone courtyard would contain the religious leaders hut and the bones of the high ranking Polynesian families. The courtyard was a very sacred place and even today offerings are left behind but no human sacrifices left anymore.

Offerings still being left to the Polynesian Gods and Family. 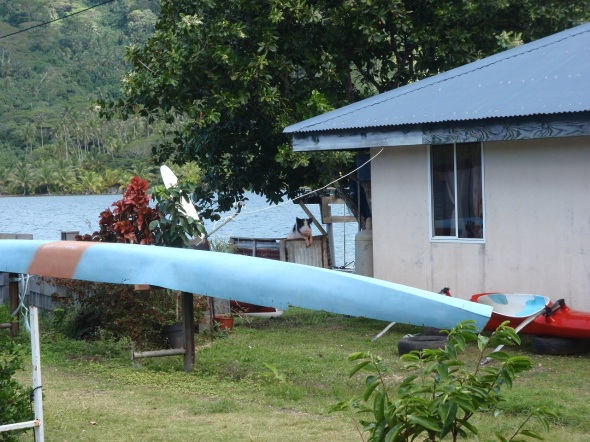 On our hike back we saw a pig just hanging out in the backyard of a locals house. I just thought it was fun to see.

I wanted to get a better picture of the bay we were anchored in so I climbed a cliff.

After I climbed up this cliff there was not a good view but you can get the idea. 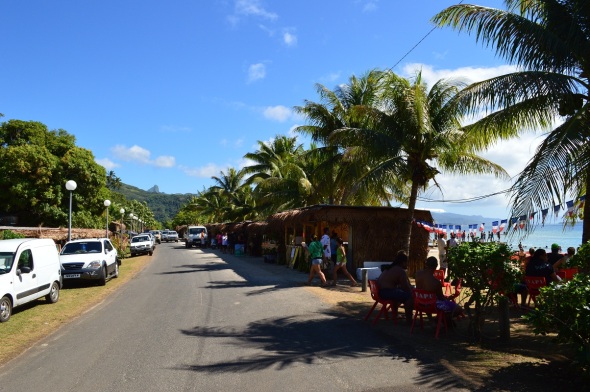 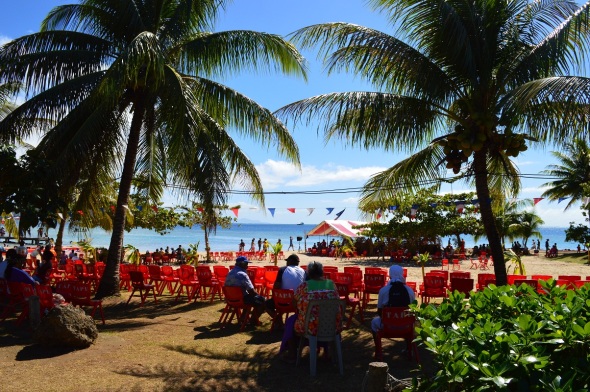 We got pretty lucky and stumbled upon a paddle competition and the street was lined with food venders. So we ate lunch and I had a French baguette with chicken, fries, and sauce for only $2.50. That is a really good deal.

The next day we took our dingy up a river off the village Hotopuu and motored through a very dense tropical forest. We did this little trip mile up the river with our friends Ben, Sara, Richard, and Brian.

Saw a lot of local homes on the river and there gardens. Even had some kids throw some fruit at us but we through it back at them. 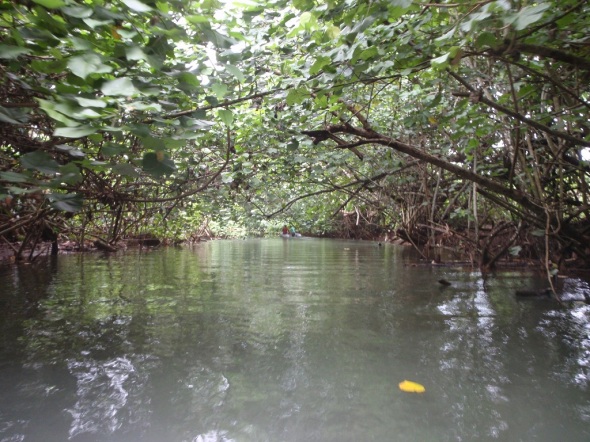 We met this man on the river and he invited us to tour his garden. The man spoke pretty good English but as he told us about his garden he would keep saying “this is good for me, or this good for you” or “this is no good for you but good for me” it became very comical.

We got back on the river and went to our boat and sailed to the north Island Tahaa because the wind was blowing up to 25 knots and our thought was the wind would be less on the other side of the island. We were very wrong about that. It was the first time that we dipped the rail of Dragonsbane into the water well-being at anchor. We were getting 50 knots gust that would heel the boat way over onto its side. I did not sleep for many days well I prayed our anchor would hold and kept us off the coral reefs that surrounded us.

It is hard to see from the picture but I took it at 1 am as the wind was blowing up to 40 plus knots in our anchorage. The picture is of the moon and a very large halo that made it look like a bulls eye. The sky was clear but the moon had this halo and it was the most amazing night I have had in a long time. I thought it may be a eclipse with the earth between the sun and the moon. I am not sure or it could have been a weather phenomenon. 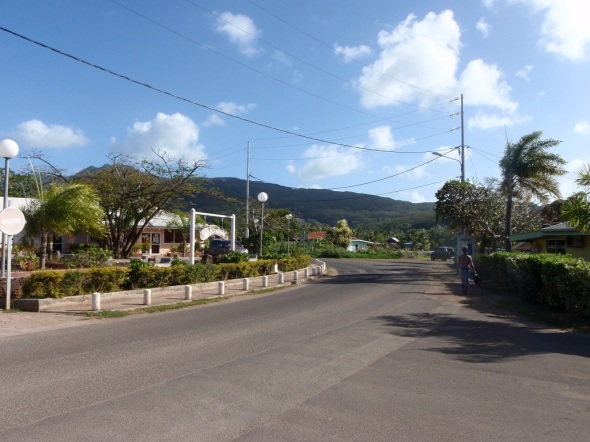 After a few days of holding on and weathering the wind on the anchor we went ashore and hiked 8 miles to a small village called Pauhure. We need to get some supplies and thought that we could hitch hike but no one would pick us up.

As we walked along the Island road to town we noticed that the local homes had buried there relatives in their front yards. As you can see in this picture in front of the pink house is a grave. Most of the homes had graves in there front yard. I didn’t want to walk up to it out of respect for a better picture.

Yup that’s the Island Hospital, I really hope I don’t need to go there. 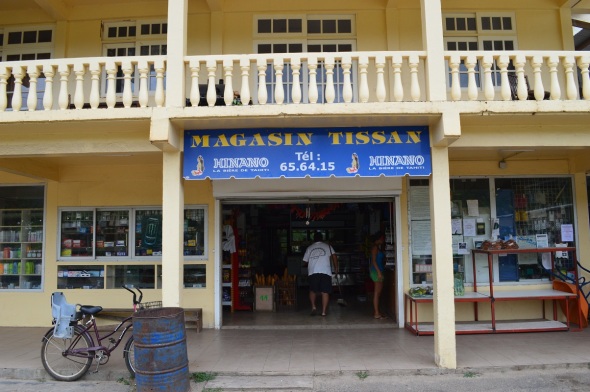 The little store that I got some rum and Baguettes. That was about all they had that I could use.

Nice shot from the road of Bora Bora and a local fishing boat.

These ladies are cutting up the meat from coconuts that are being dried in the sun. They then sell the dry out coconut meat for the production of oil that will be used for green fuel energy. They don’t get paid very much per pound but every little bit helps.

I wanted to show and let you listen to a few of the very typical sounds and sights you would see on most of these non-tourist islands in the above video. Sorry for my one F bomb I was just getting so sick of listening to the stupid roosters. They never stop making noise and the morning is the worst.

Another Postcard Sunset from our anchorage in Tahaa Island looking at Bora and Bora.

Hope you all enjoyed the last week of pictures!

This entry was posted on July 30, 2013 by Jacques. It was filed under Uncategorized .