Sorry for no Up Dates, Still in Tahiti

Well what can I say I have been very busy the last two weeks and have neglected my blog, oops. I hope that the small amount followers I have gained in the last nine months have not lost faith in my blog and not moved on to more exciting reality TV or some other stuff. Anyway the real reason for my silence was a few events that have changed my sailing schedule, and crew. I had some personal family issue back home, but everybody is doing well so don’t get to worked up. My dad has decided to take a break from sailing and will go home. Adam and I will continue through the last three chains of Islands to Tonga and meet up with our new friend Ben in September. Do to the duration of our stay here in Tahiti and a few other places we will have to spend the winter season in New Zealand until April 2014. We cannot sail through the Indian Ocean during the winter months December to April.

I should be in New Zealand by October or November of this year. I plan on touring a lot of New Zealand, and Australia to kill time, I know a rough life. I may get a job as a waiter or something who knows. Anyway I will welcome any friends or family to come visit Adam and I in New Zealand if you feel adventures. But for now I have compiled the last two weeks of our adventures into a few photos and videos for your enjoyment and hopefully a few loughs. Thanks again for following our adventure. 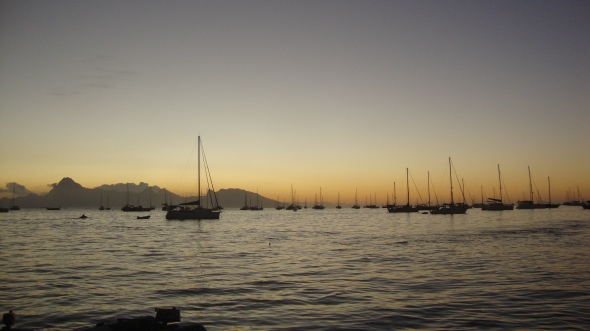 The mooring field where Dragonsbane is tied to a mooring ball and the sun is setting on the Island of Moorea in the background. Tahiti is to my back when the photo was taken. 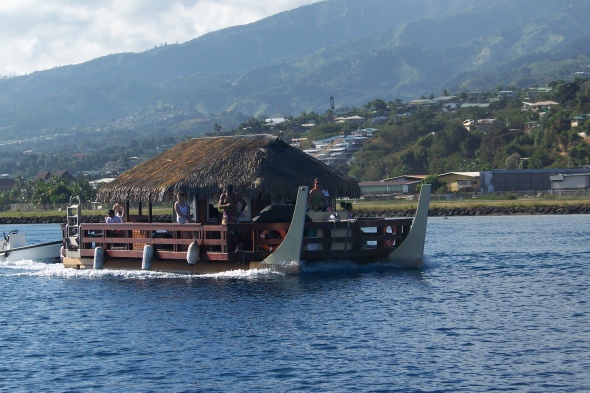 This was taken in our anchorage and these huts on pontoons would drive by and anchor. The folks onboard would drink, swim, and have a great time.  I think when the time comes I will build one these for the lake. 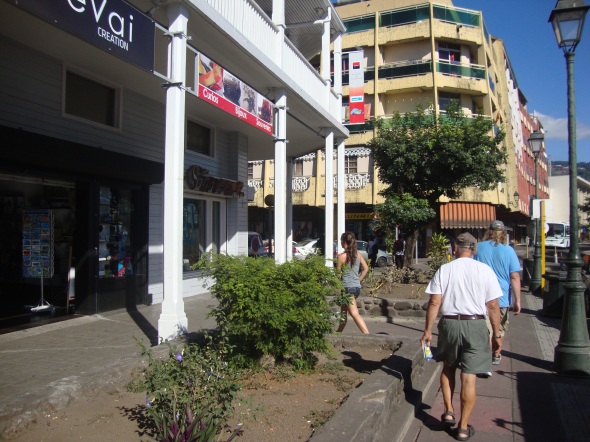 We walked downtown Tahiti and this was one of the busy streets and little cafes you would see.

More of the downtown area and as you can see a lot of the buildings were in rough shape. I guess I was thinking Tahiti was a much cleaner city but like most big cities it was very dirty.

The center market of Tahiti where you can buy anything from fresh fruit to blankets or spices.

In Tahiti the main city of Papeete the traffic was always at a stop and nobody really moved very fast. I was on foot so I really didn’t care but I was surprised to see so many cars.

Ok so these were a few friends of mine that I met on the sea. The guy in the Viking hat is Toby and the other two are fighting on the ground. But anyway they have sailed from Sweden in a 24 foot sailboat and they all live on it. I think I was crazy but they take crazy to a whole new level and I always enjoy their stores and drinking with them. We are always finding each other in the anchorages. In this situation we were celebrating a birthday party for Lilly who is traveling in a 28 foot sailboat with her boyfriend. They are going to some Island that her father owns some land that he bought in the 70’s to build a tree house and live in it. I am telling you, I am not making this shit up!

After drinking at the birthday party we strolled down the beach park to a area were all the local people bring there vans and set up mobile restaurants. You can eat like a king for $15 bucks and still have dessert. I had pizza and beer, lol.

Ok, so it’s a funny story! So after we left the party we tried to find a bus back to the anchorage but the buses stop running at 5pm on the weekend and so after walking two miles we hitch hiked back to the anchorage. When we got back we all met up at the Dinghy bar and drank beer, smoked, and even had a chew!

Ok so after a full night of drinking and what not, I felt like hammered shit! But we went to the 2013 Puddle Jump event for sailors in Tahiti and after a few free local rum drinks I was back on top. NIIIICE!

This picture was taken the next day. All the sailors from the 2013 Puddle Jump gathered in the main harbor of Tahiti for a group sail to Moorea for a fun weekend of games, drinking, and fun. We happened to get caught in a local paddle race I hope they don’t chase us for that. 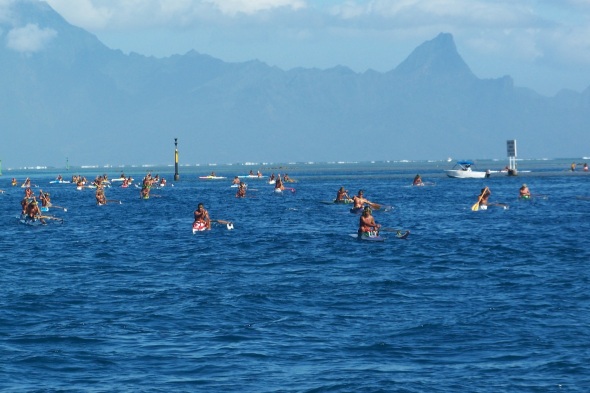 Ok, so maybe we should not piss off 100plus Polynesians, oops to late.

See its cool they are going around.

Well we made it past the paddlers and into the ocean and we are all off to Moorea. 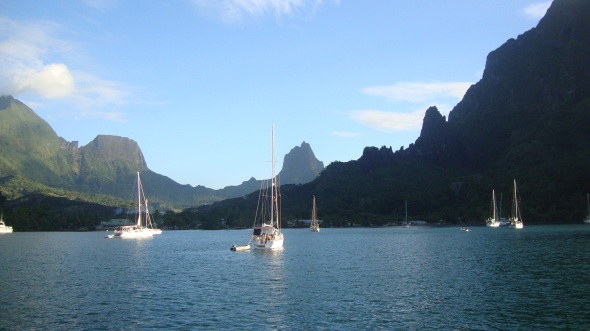 So we went to shore and had dinner with all the puddle jumpers and watch the Tahiti Ukulele competition. I thought it would be very boring but I was wrong. I never new you could get heavy with a Ukulele

We woke up early the next day and joined our team for the paddle boat race. Our team name was skitsamma which means “What the Fuck” yup it’s a good one.

And we are off! We placed first in our first heat then lost our second becase we got pinned in the turn and could not paddle. The team we beat the first time ended up winning the final heat. So we should have won it all. Owell! 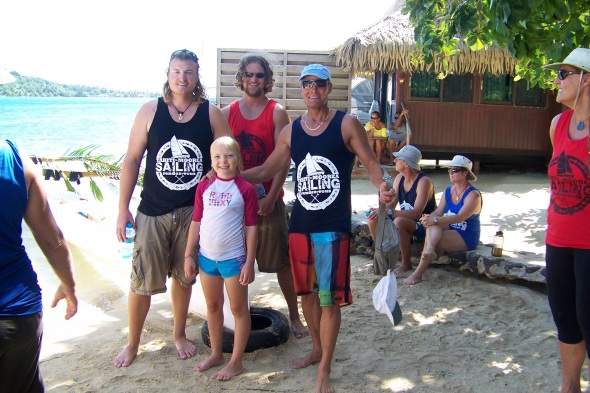 Our team was from left to right Jacques, Adam, Lena, Para. Ella and Pare are from Sweden who were both great paddlers, defiantly  Ella! That girl paddled her little butt off!

My dad was on Orca Suite Team and they did a great job but the local ladies crewing the boat messed up and they lost. 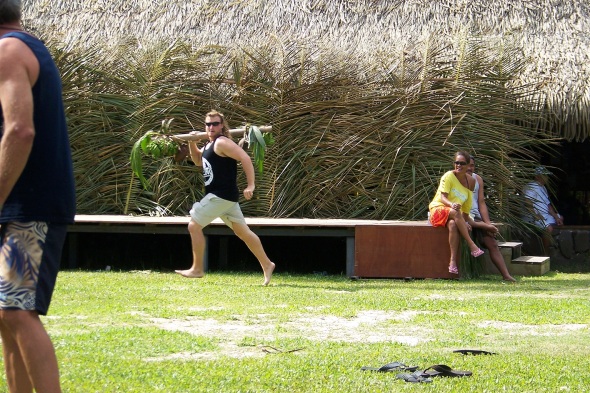 We then played this local game were we round around in a circle carrying a log with bananas strapped to it and then hand it off. I was just trying to tack the bananas and run away!

Adam caught me and won the race. 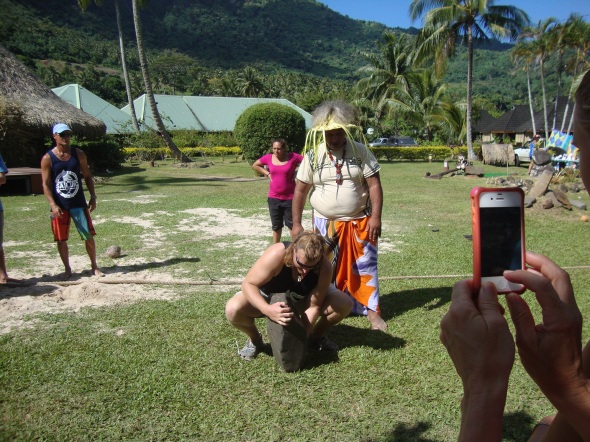 Then I had to pick up a big rock that weighed 115 pounds first.

No problem, just like a bundle of asphalt shingles! Ok were is the ladder, up  to the roof we go.

Adam took control of that rock next and kicked its butt. 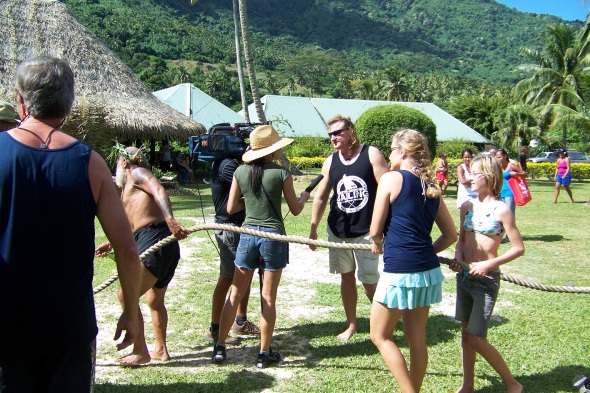 Don’t worry I represented all that is America in my local news interview! I am not sure if they understood me but it was a fun interview.

After a weekend of games and drinking we walked around Moorea.

This entry was posted on July 10, 2013 by Jacques. It was filed under Uncategorized .