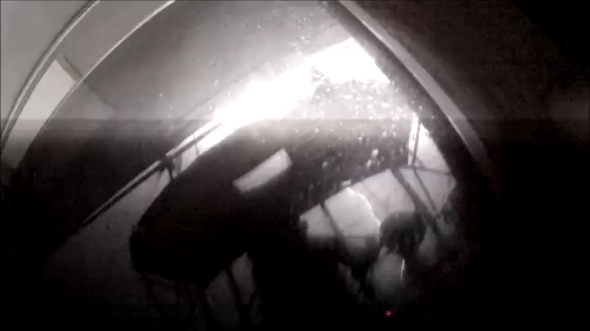 Thunderstorm at night 45kts wind and 4 meter swell plus

Based on our experience from our last passage out in the Auglhas current, swell, and weather we decided to go for it in the next available weather window. The weather looked good for a 48 hour period. We could complete the next 320 nautical mile passage in that window but it would be close. The weather began with 25kts on our backs with 2 meter waves. The barometer read 1017MB and rising, good news. We made quick work of the first 120 nautical miles passing Port Elizabeth 15 nautical miles off our Starboard and barometer read 1022MB. By mid afternoon when I came on watch the barometer had fell to 1018MB in only a few hours. The wind was now a constant 35kts right on our stern pushing us along at 8 kts under full reefed sails. 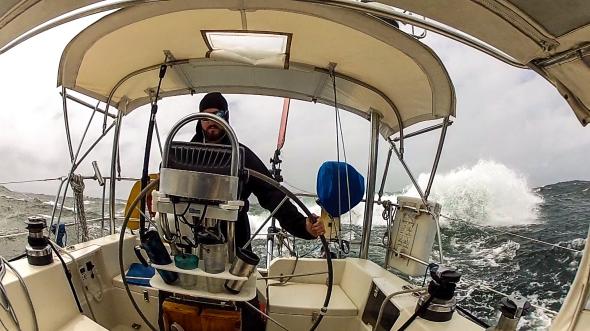 Cary making it happen in Huge seas wish photo could do the waves jusitic.

By late mid morning the next day the barometer read 1010MB with 68 nautical miles to go. The wind was now 40 to 50kts with 3 to 5 meters swells pushing us down waves 8 to 15 kts go crew. We were also getting thunderstorms crossing our path. At this point we started heading straight for the coast trying to get in the fetch of land to protect us from the growing waves and wind. We realized we were no longer 10 nautical miles off shore because the coast dipped north in our position, we were 26 miles offshore with a barometer hitting 1008MB meaning we had one hour to get out of the Auglhas current before the wind changed and huge breaking 10 to 15 meter waves started. It would take use three hours to get within 10 miles of shore. As we raced for shore waves began filling the cockpit and breaking over the entire deck of Dragonsbane. At one point I watched been at the Helm disappeared in a breaking wave in a foam of white and blue ocean water. It was Sarahs watch but I took her watch and began to helm the rest of the way back to shore turning down waves and protecting Dragonsbane from broaching.

An hour into my watch a giant hump back whale surface in a swell half a boat length off my Starboard. I was heading for a collision with the whale and new if I hit it head on I would lose the keel because I was surfing down a wave at 12 kts. I just made a choice to turn hard over and aim right for were the whale submerged and hoped for the best. I screamed Whale in hopes to alert the crew down below. As I turn hard over I paralleled the swell which knocked us sideways on our beam submerging the port deck underwater. The hump back whale surfaced right under half the boat on the portside and Dragonsbane rubbed across her side. We felt no impact and I regained heading and continued going.

The closer we came to shore the weaker the swell became and because the barometer read 1005MB we were in the middle of the low pressure. Like a hurricane the middle had no wind so we began to motor but still had 3 meter swell. The swell was moving much faster than us and would break right over the back of the cockpit soaking whoever was on watch. We finally made it to Mossel Bay by 03:00am. WHAT A RIDE!