Running Into the Jungle!

When we woke up this morning we were once again greeted by the boat boys as the locals call them. They each have colorful boats with outboard engines and patrol the anchorage for thieves and offer many services to cruisers. One of the boys offered to take us up the Indian River in Dominica for $18 each. The river runs deep into the Jungle of Dominica and sounded like fun so we agreed to go.  We hopped into the boat and were off to the river and as we made our way into the entrance the captain of our new vessel stopped the motor and started to row with his hand carved oars. Apparently it is forbidden to motor up the river because it is a natural preserve. 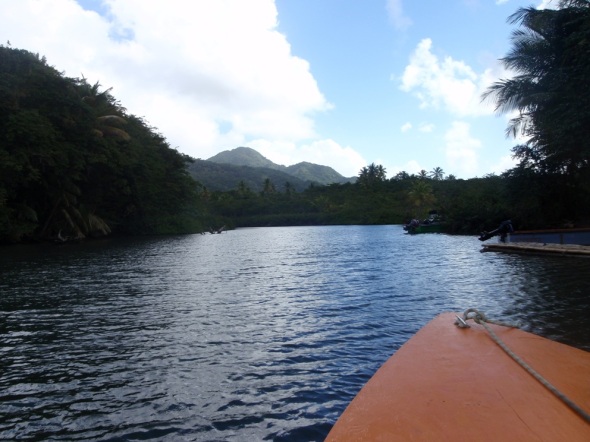 Entering the Jungle from the ocean into the Indian River

As our guide rowed his way up the river you could feel the humidity begin to rise and moisture in the air was thick with the smell of green leaves sunning themselves in the above canopy and brackish water which is a mix of salt and fresh water. All you could hear was birds, leaves rustling, and loud squeaks of the bamboo trees.

As the jungle canopy began to close off the sky above our heads the banks of the river began to move with all kinds of little black crabs that had one claw bigger than their body and looked very silly as they burrowed there way into the mud banks. 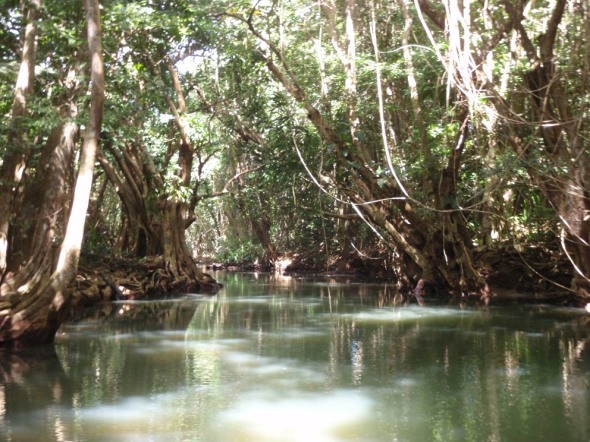 The Jungle is very thick now

As we approached a corner our guide pointed out the location of where the scene for “Pirates of Caribbean”. The scene was for the whitch that they sought out in one of the movies, not sure which one.

Our river guide was the pilot for the movie on this river. He was very proud.

The further on we rowed we ended up finding a Bar in the middle of the Jungle! I went in to find only a chicken perched on a white cedar chair back making all kinds of  noise. I walked by cautiously  as my interaction with chickens has been rough up to this point. Anyway he did not care I was there, nor did all the lizards in the tin roof above our heads. Unfortunately  all the rum was gone so we head back down the river.

The Bar in the Jungle with a chicken only

Green and blue lizards hanging out above our heads

The adventure ended with us seeing some boa-constrictor snakes sunning themselves way up in trees but I could not get a good picture. The guide dropped us of at Dragonsbane and I am now making her ready for tonight’s  sail to the island of Martinique. Which I am told is a very French island and is friendly to cruisers but has a lot of petty crime. It should take us about 12 hours to get there but I am hoping that we will have wind again and sail swiftly through the moonlight! Good day and Good Luck!

Now the Island of Dominica

We departed iles des Saints the French Island that I have come to love and will return. Our next short trip was 22 nautical miles to the island of Dominica which contains a large rain forest, the world’s second largest boiling lakes, and mud ponds. We had a great sail with 20 knots of wind on our beam we cruised 7.5 knots the whole way. My dad cleared us in by going to the custom agent’s house because it was a holiday today on Dominica and the main customs office was closed. We went to town to enjoy the carnival that celebrated the freedom from slavery for the people of Dominica. It was very interesting only 20 nautical miles away and I found a completely different island and culture. The local people were very friendly who speak English, but the town was covered with trash, and poverty was very noticeable. By overlooking the bad I saw the beauty in the landscape and people. Even though the town was rough the people where celebrating in a very hard core way by drinking, singing, and marching behind large speakers mounted to trucks. The atmosphere was fun and lots to take in, not going to lie I had a few drinks myself! 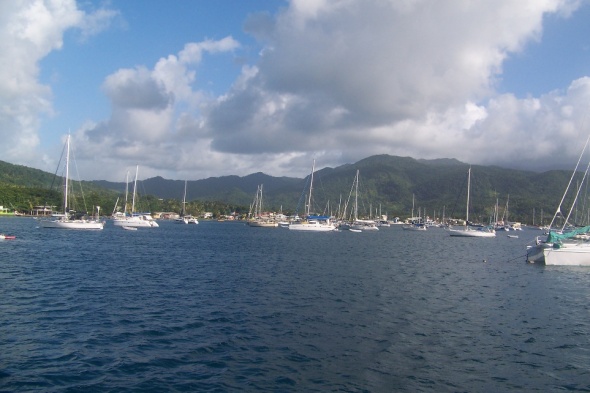 Just anchored in the bay off of Dominica Island

The moving sound stage for the moving party through town

House in town. This is why we have building codes people

Trying a local rum shot which came from the jug behind me with all the stuff in it. I wont lie it tasted like a shot of potpourri.