Back in February of this year my good friend Cary flew into New Zealand to go on an adventure. After some thought and research I decided to hike the famous but rough Dusky Track near the Milford Sound on the South Island of New Zealand. The Dusky Track description for high adventure seeking people was as follows “The Dusky Track is a complicated route that travels 84km across two mountain ranges, 21 three wire bridges, and is covered in waist deep water and mud. It is recommended that a guide be used to complete the track”. Ok sounds perfect and off we go! 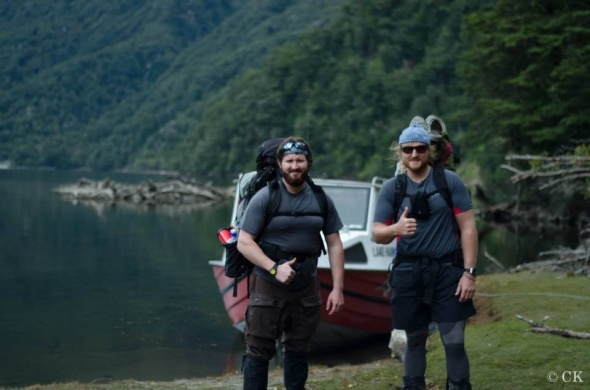 In order to gain access to the trail head we had to take a 1 hour boat ride that sliced its way through the glassy waters that reflected the mountains that surrounded us. It was a postcard image on the water that I looked into as we glided across the wild south island expanse. The boat had 5 men , I recall a nice older man from Australia hiking his way around New Zealand living off odd jobs and having few things to hold himself back from a life of adventure. A young man with a rifle looking to go deer hunting up in the wild unforgiving mountains, which I never did see again. A young American out traveling the world behind his Nikon Camera and never stopped taking pictures of us or everything else. I wanted to toss him into the ice cold lake and be done with his annoying questions. 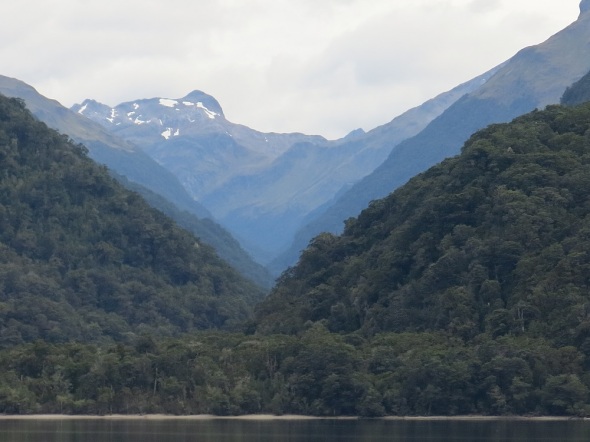 The picture above shows our route from the shore to the mountains you see in the background. You can see how the valley makes a V right up to the blue sky. That’s where we are going and over those mountains.

Right from the beginning we could tell that traversing across the land was going to be a challenge. For starters the trail was hard to find but had good markers, you just had to look at the lay of the land and push on. See if you can find the orange triangle marker in the picture above.

Our first hut was in a swap that was covered with black flies that would bit the heck out of you. I could no longer stand the fly’s so I took part of my tent and hung it in the bunk to sleep in. Work well but was very hot to sleep in.

Day 2
Woke early had our breakfast of peanut butter, torte wraps, and cheese to get us powered up. Off we went into the twisted trail that tried at every step to twist our ankles and knees.

We started to cross all the 3 wire bridges and they were fun to cross. As you walked across the wire it would bounce and sway from side to side.

As we traveled up our fist mountain we had to muck our way across tons of mud holes and swamps to get to the bass of the mountain. As you can see it was not easy getting through the mud. But after many hours of trudging through mud and water we broke through the tree line and what a sight to see. 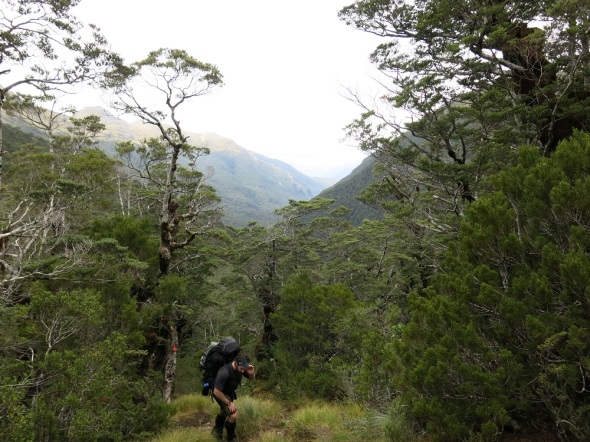 As we hiked the last mile to the hut to spend a well-deserved nights rest the top of the mountain became covered in clouds of rain and rainbows. 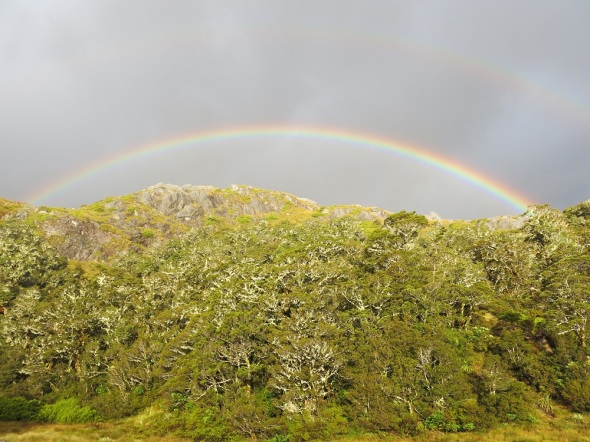 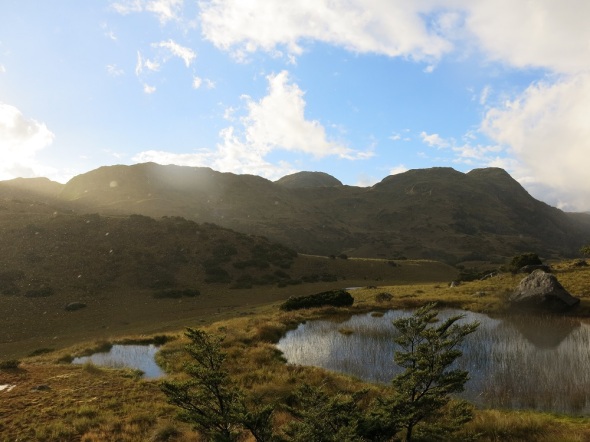 The dark clouds of the storm that is coming to get us up on top of the mountain. The mountain top is filled with little pond lakes that are dark and cold but reflect the beauty that surrounds them.

After a stormy night on top of the mountain we packed our gear and left the hut. 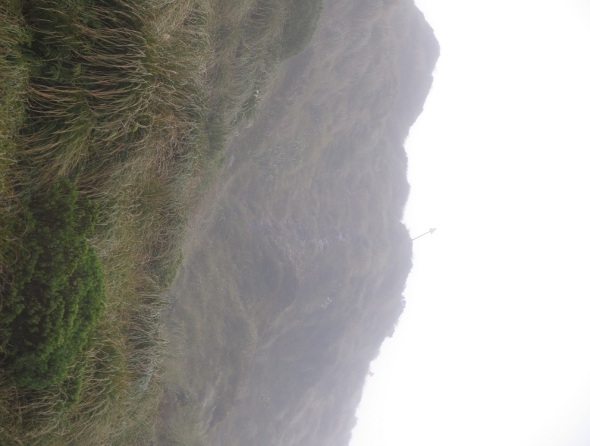 Our morning was met with cold hard wind that sliced through your gear right to your bones. The ground was wet and mushy. Our boots were soon soaking wet and heavy to lift. The trail marks appeared and disappeared as we hiked over hills on top of the mountain. 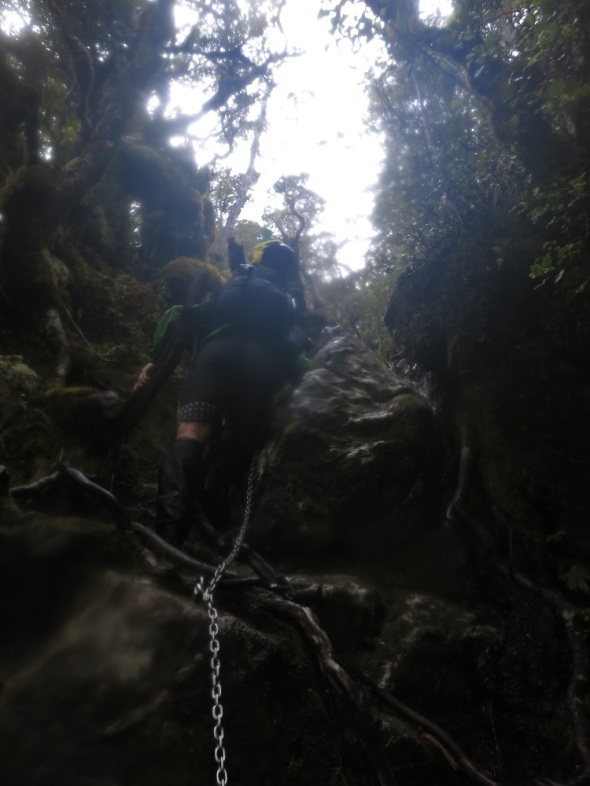 After a morning of hiking through puddles, and snaking our way around little lakes on mountain tops we had to descend 3500 vertical feet to the sound below that connected to a river that flowed to the ocean. The decent was very wet and rough, made up of twisted roots and jagged rocks we climbed down with our full packs and sore knees. At points we used chains that were bolted to the rock faces to descend safely down the wet trail.

As the valley became closer the trees became thick with mushrooms and moss. Waterfalls became close to the trail and roared load like lions greeting us to our next challenge.

Finally at the base of the small mountain we had to hurry because it had been raining hard all night and the river that we had to cross was swelling and if we could not cross because the water was high would have to sleep under the stars. We plunged knee deep into the cold river water and made our way across the 3 wire bridge to the hut.

We stripped our wet clothes off and got into dry ones. We made a fire in a tempt to dry out our cloths.

I read in the hut that if the water doesn’t raise over the stumps the trail would not be underwater going north, so I snapped this picture before I went to bed.

When I woke up the next morning I took this photo of the stumps. O boy the trail is going to be wet and maybe underwater in parts.

Well the stumps didn’t lie, after a full night of rain the rivers raged and we hiked through water and then had to hike through river guts.

The trail would pass over river guts that would feed the main river. We would put our packs on your heads and wade through as shown above in the video. The water is ice cold from far up in the mountains. 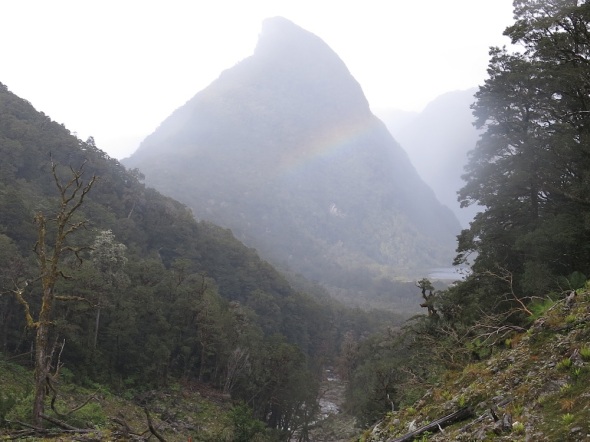 We hiked out of the valley along the river and looking back a rainbow was showing were we came from. Now it was time to hike over the mountain pass to the next valley. We could see up high in front of us that it was snowing. 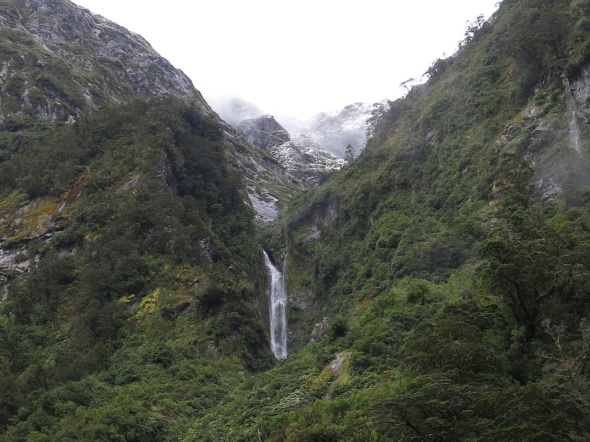 The snow was around us as we hiked through the mountain pass. The wind was very cold and blew so hard we fell over many times.

Finally at the top of the pass you could look back at were we started our day and see the river and vally below. 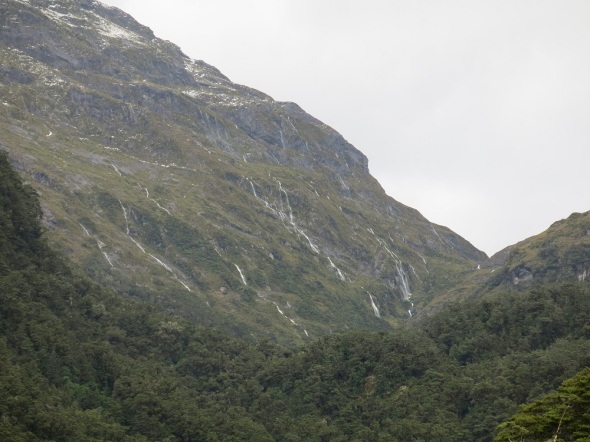 Looking around we were sounded by water falls and mist that would cover my camera lens.

The trail over the pass was very rocky and hard to get a solid foot hold with the wind blowing so hard but we made it anyway.

After 10 hours of hiking we made it to our hut and we new tomorrow we would be one last short hike out of the wild and off the Dusky Track.

We woke early slid back into our wet boots and cloths and hiked out under a beautiful sun. The land was drying out and felt fresh.

We made it finally to the end of the trail. Now let’s get to that really well earned BEER and Shower! The 8 to 10 day hike took use 5 long hard days and two par of hiking boots that got thrown out. But it was one heck of a adventure. Wish I could share more about the Swedish man we found after he had been on the mountain for 29 days and counting or the Oz man too, but that’s for another day my friends.